Recently, I read a fascinating article from the December 12th issue of The Economist entitled Lessons from “The Leopard” (http://www.economist.com/world/europe/displaystory.cfm?story_id=15065405). 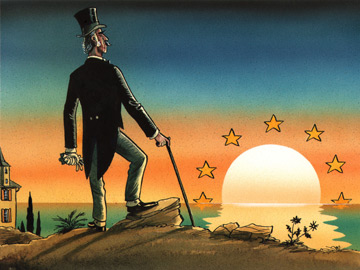 The article explained the concept of “genteel decline” from the book The Leopard. This is a fictional novel that tells the story of a rich land-owning prince who sees his lower class neighbors grabbing up parcels of land from his nobles and his sizable estate and inheritance going into decline.

But, as a prince, his “class” is too proud to act to save itself. Despite the decline and pending doom, he still can enjoy his life of culture and elegance. He expects to enjoy his leisure and privilege for his lifetime and hopes that his children and grandchildren may as well. But the novel’s author knows the end is much nearer. The prince remarks that he and his people are old and exhausted and the great sin for them is “doing” anything at all.

And this is a definition of genteel decline: The willingness of a people or group of privilege to choose decline over action… where temporary and fleeting leisure is preferred over purpose-driven action. Or, more simply put, where one looks out for his own interests (pleasures) over the interests (needs and rights) of others.

However, in reality, the irony of the story comes from its best-known line, “If we want things to stay as they are, things will have to change.”

Doesn’t this seem all too true with urban education in America… especially within the evangelical church in America (of which I consider myself a member)? Often, our primary interest is leisure and privilege for ourselves and our children (which we know often comes with superior education) with little to no concern for purpose-driven action on behalf of others. Does not an average ACT score of 17 and a graduation rate of only 60% within the Memphis City Schools tell all?

But it cannot cut both ways. Inaction on behalf of others (selfishness) will never sustain a culture or a kingdom.

Our model is Christ Himself, who actually forsook his privilege, became downwardly mobile and took action by entering into sacrifice and risk for the sake of the “have-nots” (you and me). Now we, as followers and imitators of Christ, follow suit. We do not aspire to a life of genteelness, but to one of life-giving purpose. Genteel decline is no option. Hard, difficult, downwardly mobile, sacrificial, risky, life-giving purpose for those in need becomes our way.

May we reject genteel decline and live for purpose. Need is our new opportunity.

Urban Education and Where the Red Fern Grows